Our unique, patented Physical Control Simulator (formerly called the Power Training Machine, and sometimes referred to as the pull-push apparatus) was designed by exercise physiologists to accurately represent the basic gross muscular functions of the dynamic pulling and pushing forces experienced by law enforcement officers during physical-control situations.  The PCS was born out of the research and development of Bona Fide Occupational Requirement Physical Ability Standards in Canada and the United States.  That research, by way of thorough job-task-analyses, identified the need for LEO’s to be able to physically resolve critical events during the arrest and control of suspects and/or prisoners.

The PCS measures a person’s ability to pull and push predetermined force (weight) as they move dynamically through 180° rotational arcs.  The amount of force is adjustable based on the amount of weight added to the machine.  Research for the protocols of the various standardized tests determined what that force should be, based on the average abilities of inmates/prisoners.* *

PTM Equipment is the sole source for the purchase of the Physical Control Simulator and other standardized Physical Abilities Testing components designed by PTM for use within standardized law enforcement testing protocols (E.g. Including: POPAT, COPAT, SOPAT, PARE (RCMP), PREP (Ontario), JST (NYPD), ORPAT (Oregon), ARPAT (Arkansas) and many others.

The PCS must be purchased with either the Portable Base Plate or Wall Mount to secure the machine for use.

** (Research completed by Douglas W. Farenholtz, MSc. and Dr. E.C. Rhodes included the measurement of prisoners’ abilities to apply and control resistive forces through the use of the first designs of the Physical Control Simulator.  Adult male, adult female, and youth male prisoners/inmates were studied). 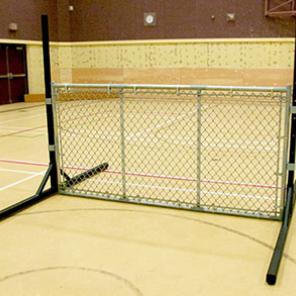 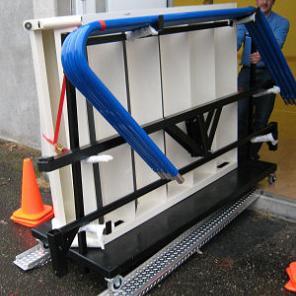 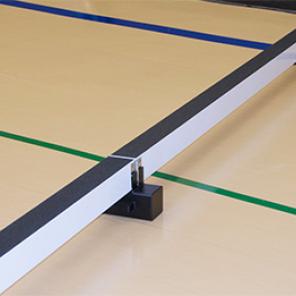 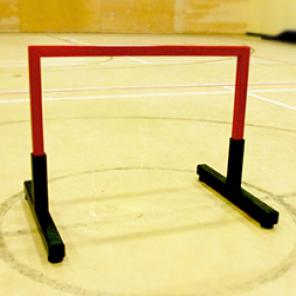 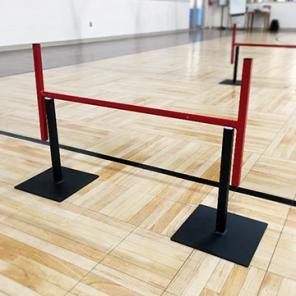 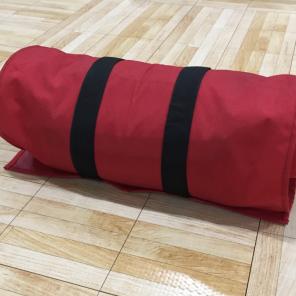 Speed and strength are both critical for passing the POPAT, but so is technique. Practicing with LEPAT helped me get through the push/pull. When I did it for the first time I had a lot of problems with it, but after I was shown how to do it properly the push/pull was something I could become confident in! Knowing what to expect and how to do it will ease your mind and allow you to focus on getting a competitive time!
~ Jennier M.  (June 2014)

This is Shane. Maybe you might remember me...Im the guy that came to LEPAT 3 times in 2 months. I took the POPAT for GVTAPS a few weeks ago and Im happy to say that I have passed the POPAT. Thanks to you and all the valuable information and tips you have given me I got a 3:30 on the popat...thats an improvement of 25 seconds since my last time!  Thank you very much for your support and I will recommend you for anyone thats looking to do the popat....

The practice was absolutely invaluable.  I cannot stress how much more confidence I had when it came to do the real thing.  LEPAT sets up the practice sessions the way they should be done.  I had gone elsewhere to practice before, but there's no comparison to what LEPAT is doing.  You guys rock!  Thanks so much for the help.
~ Jacob H. (Dec. 2009)

This was money well spent.  The value of knowing how to do these tests before you do it in front of an actual recruiter is well worth it.  It saved me a lot of embarassment.  I found out I needed more conditioning before doing it for real.  Thanks!
~ Janice L.  May '07

"I would like to thank "LEPAT" for helping me substantially through the process of getting a great time on the official PARE test.  The practice session that I attended earlier was a huge plus in providing me tips and areas I needed to improve upon. The Instructor was clear, professional and the coaching throughout was outstanding."

I took the PARE test 3 times before I took the official one.  On my first practice test I failed miserably, and I didn’t know exactly what to do to make sure I didn’t fail my test with RCMP.  After my test you gave me an honest feedback which helped me see where I was at per my physical ability to pass the test.  Your feedback helped me change my workouts and work harder so I didn’t end up failing the PARE.  I passed the PARE and I shaved off 1min 4 sec from my first practice test, in 5 weeks.  I would not have been able to do this without your feedback, tips and advice.  If you are serious about passing your test please do yourself a favour and take the practice test with LEPAT before you go for your official test.  I highly recommend it!  Thanks a lot!
~ Sunny H.  (May 2011)

Thanks again for the PARE practice session on Saturday. I have a lot of appreciation for the service and especially how you treated every person who participated - offering respect and encouragement to everyone equally. I wish there was something like what you are offering on Vancouver Island.
~ Leslie W. (March 2015)

"As a correctional officer transferring to another department I could not have passed my physical without LEPAT.  You were beyond helpful, and the feedback I received was invaluable.  LEPAT is an extremely professional, and well run program.  I will be recommending LEPAT to any of my friends moving on into a law enforcement capacity without question.   Thank you again for everything you do, you TRULY gave me the edge I needed to move forward in the application process."

Thank you for all your help, it was invaluable."

Thanks for your great help on training for the SOPAT. I only trained one time with you, and had from that Saturday till Wednesday to be prepared for the SOPAT. Your training was invaluable. I was able to shave 29 seconds off my time. It was great. Thanks for everything, I would not have been as prepared - both mentally and physically - without your program and experience as a guide. Thanks again
~ Taelin F.  (Dec. 2008)

I just wanted to say THANK YOU to you for all of your help  Without your help during the practice and even after, I know I would not have passed the POPAT. I really appreciate what you have done for me and cannot begin to express my gratitude to you.
~ Sarb S. (Jan. 2009)

Hi Mr. Lane, I would like to thank you personally for the encouraging words and advice before my SOPAT Test. The tips you gave me and the extra push during my test was very helpful. I would recommend anyone and everyone preparing for their physical test to book it with you.
Jeremy lane is the real deal when it comes to the rigorous physical training preparation. I would rate this facility 5 star !!

The first time I ran the PARE at LEPAT my time was 3:35, the second time at LEPAT was 3:15 and my third official time with the RCMP was 3:06. Couldn't have done it without your services and you definitely give great tips to reduce time and distance. Thanks so much and I will be back before DEPOT for some more training.
~ Barry M. (March 2012)

I thought I was in good enough shape to do this test - it looks much easier than it is!!  I practiced twice with LEPAT and trained hard.  I was able to successfully pass the POPAT with flying colours!
~ John M.  Apr. '07

Thanks to LEPAT, I gained the confidence and familiarity I needed to shave over 20 seconds off my time.
~ Kevin M.  Apr. '07

I have to say thank you for your training.  The breakdown of each section completely helped and your tips were invaluable.  I shaved 48 seconds off my POPAT time!

"Thank you for helping me achieve a better score (COPAT).  I'll be back for the PARE soon!"

Thanks to LEPAT, I passed the PARE!

I attended 2 practice sessions with LEPAT. After the first practice test, I realized I had some work to do. I left that session with encouragement and suggestions as to how to improve my fitness and strength. I am a very active and fit individual, but with Jeremy’s advice I managed to push my fitness to the next level. Between my first session with LEPAT and my official PARE testing, I managed to shave off 52 seconds from my time!

LEPAT gives you the opportunity to identify your weaknesses and receive the guidance required to pass your fitness test. I highly recommend it.

I found your suggestions and coaching a big help and it all added up to give me a good PARE time. Also just the opportunity to do a couple of practice runs was a huge confidence booster so when I did go to run the PARE I was a lot more relaxed than I might have been otherwise.
~ Clifford P.  June '07

"When I first heard about LEPAT and their practice testing, I didn't think I really needed it. Why? Because I am young and in great shape. I am a US Marine veteran and former cop from the US. I figured I would be able to pass any physical test they threw at me.

If I had not gone to LEPAT, I would have failed the POPAT. I took the class twice, and was able to shave 25 seconds off my time. The practice not only allowed me to pass the POPAT, but have one of the better times that day. I am competing for only a few available police constable positions -- and LEPAT gave me the edge I needed".
~ J. Cain

Thanks for all of the tips regarding PARE testing - it was really appreciated.
~ Marie P.  (April 2011)

I just wanted to thank you for the oppourtunity that you gave me to run the POPAT the other week. You were really helpful, especially with your instructions on the push and you made me feel a million times less anxious about it. I was able to run it in 3:30 and it was the first time that my legs didn't feel like lead right from the start. Thanks!
~ Julia G. (Sept. 2010)

The opportunity to practice for the POPAT was incredibly valuable - I went 3 times! I can’t imagine trying to do the test without the familiarity and comfort provided by my practice sessions at LEPAT. I barely passed the POPAT during my first session with LEPAT, and through practice I was able to lower my time by a full 30 seconds!

"Just wanted to say thank you for the experience today.   It was great to run the PARE and I appreciated the feedback and identifying the areas I need to focus on.   I am incredibly motivated to get into law enforcement and this experience reinforced for me that I can absolutely do it.  I will see you soon for another practice run."

"I passed my COPAT!  Thanks for your help and squeezing me in last minute!"